Binging on the Small Screen

Living in a small fishing town for most of our Peace Corps career has meant a lot of nights at home after sundown. If we weren’t celebrating some kind of fiesta, there was a good chance you could find us at home playing games, cooking, or watching TV or a movie.

It’s an exciting time to be a TV fan since there so many amazing shows and they are more accessible than ever to watch for free.  Here’s a list of some of our favorite TV shows that we have enjoyed during our service. Most can be found streaming on either Netflix or Hulu.

Orange is the New Black 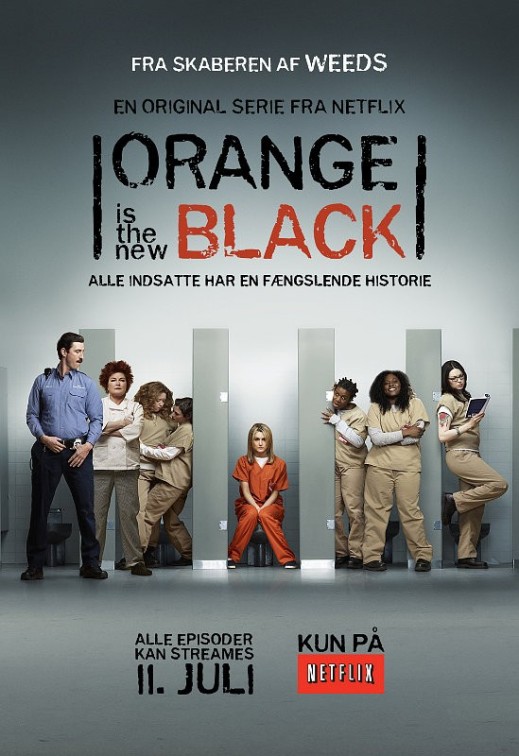 It’s safe to say that Netflix has entirely changed the TV-watching landscape. Not only can you stream your new and old favorites (Twighlight Zone anyone?) but now Netflix has introduced its own original programming. Two of our favorite new shows are Orange is the New Black and House of Cards. Orange is based on the memoir of a woman who makes a stupid mistake in her early 20s and pays for it with a stint in a Connecticut prison. The acting is superb and features one of the most diverse and talented crop of actresses on TV right now. You can watch each of the first seasons streaming on Netflix right now.

Based on a mini-series from the UK (which was based on a book), this adaptation stars Kevin Spacey as a Washington insider who is a master manipulator. It’s like a mix between The West Wing and Damages.

Hands down the most innovative and exciting show I’ve seen this year. The only downside is that there are only 3 episodes per season and there are only 2 seasons available to stream. Just as The Twighlight Zone dealt with Cold War anxieties, Black Mirror in the same style (each episode stands alone with a new ensemble cast) explores our modern maladies and preoccupations with technology, the 24-hour news cycle, and identity politics in the age of social media.

The black mirror to which the title refers is the shiny screen of a smart phone, computer, TV, or other surface that displays content at the same time as it reflects our own faces back at us. This show is not for the feint of heart, though. Episode One gave Paul nightmares and I had to close my eyes for part of it. However, I whole-heartedly believe it’s one of the most provocative and truthful shows out there.

Another stand out from the UK. I won’t give away too much since the fun is in the story unraveling itself before your eyes but I will say that the lead actress, Tatiana Maslany, is incredible in her portrayal of several characters on the show. It isn’t a spoiler to say that this show deals with issues of cloning, identity, and medical ethics.

A fun re-imagining of Sherlock Holmes in present day London. I appreciate the way the writers have used technology to update this classic.

We haven’t had a physical TV for many years and when we did we rarely watched the networks. There are few shows on network TV that we actually watch and this is one of them. When I just need a dose of positivity, wackiness, and fun I know I can turn to Parks & Rec. Paul thinks I act like the leading lady, Lesley Knope, which I can’t entirely deny. When she stays up late silk-screening t-shirts and making hand-made holiday presents I have to admit that he’s at least a little bit right. On the other hand, her now husband is an accountant and consultant – sound like anyone you know?

There have been many stand-0ut family dramas over the years and this one belongs on the list of the best of this genre. The characters are flawed yet relatable facing challenges that are all too common these days – facing breast cancer, a child on the autism spectrum, single parenthood, and infidelity. It covers all of the classic family themes with great acting and a lot of heart.

What can I say about Breaking Bad that hasn’t already been said. There’s a reason why this show and its ending this year were such big topics in pop culture. Some of the best acting on the small screen and enough twists and turns in each episode to keep your mind blown. Altogether one of the most finely crafted shows I’ve ever watched from the performances and music to the cinematography and operatic themes I will miss watching this masterpiece.

Friends have been urging us to watch this show for years. I’m glad we finally did! One of the shows that helped to solidify HBO as a small-screen powerhouse, The Wire focuses on the streets and docks of Baltimore and delves into the local drug-trade, police force, news coverage, and the politicans who keep the city’s big wheels turning. The best part about the show, in my humble opinion, is that it portrays each of the players in the game with equal honesty so that the viewer can understand each character’s motivation even if their actions are reprehensible.

Showtime is giving HBO a run for its money with its own programming. Leading the charge currently is Homeland, based on a show from Israel that explores politics, espionage, and the lengths that organizations like the CIA are willing to go to as a matter of “national security.” Very fitting considering the current political context.

Thanks to **Titi** for sharing this inspiring video. I thought it especially poignant today, the anniversary of the death of Peace Corps Founder President John F. Kennedy, to share a song dedicated to all of the volunteers out there who give of themselves to help others.

Thanks to **Khayla** for sharing this! Toys for girls that aren’t pink? A Rube Goldberg machine? Encouraging young girls to think? What could be better?

Thanks to **Kim** for sharing this on Facebook! Another creative idea for a project while your kids are sleeping. I did a little research and found the parents are Refe and Susan Tuma from Kansas City. Read more about this project here.

When searching for tutorial inspiration for how to decorate onesies I found several that suggest using a pencil eraser dipped in fabric paint to make polka dots. While I like this creative solution, I took the idea a step further and figured out a way that I think is easier and produces cleaner results. All you need are scissors, cardboard (I used an old cereal box), and those sticker reinforcements used on hole punched paper that you can find at any office or school supply store (or aisle).

In addition, you’ll need fabric paint and either small paintbrushes, sponges, or foam brushes. I used thin paint brushes and it worked out fine.

I bought primary colors of fabric paint and then mixed them to make additional colors like orange and green.

Cut the cardboard to fit inside of the onesie, taking care to make it large enough to cover any area you want to paint. Don’t make it too large that it stretches out the fabric too much, though. Use binder clips or clothespins to secure the fabric to the cardboard so that nothing moves as you are painting. Place your stickers on the fabric. Be creative! I wanted an overall polka dot look but you can also make shapes, patterns, words, or initials. 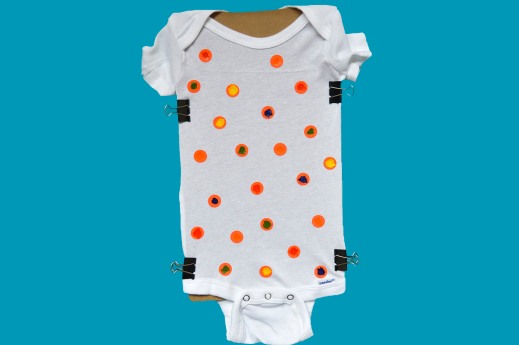 Carefully paint over the stickers with the colors of your choosing. I decided on a rainbow color theme. 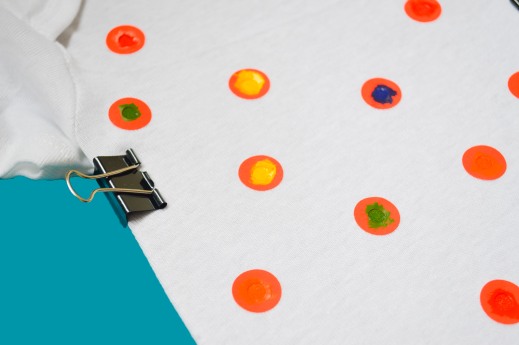 Paint inside of each circle and don’t worry if you paint on the sticker, too. Just don’t paint outside of the sticker by mistake unless you are trying to use the reinforcement to create negative space circles, which, of course would also be súper chévere! 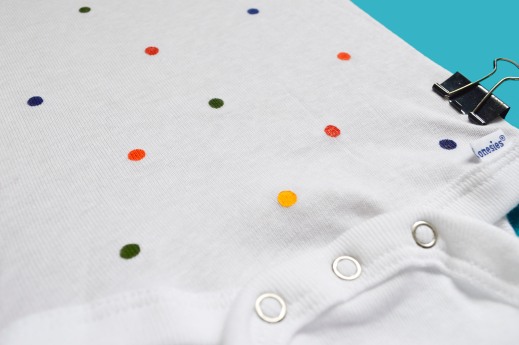 I dried the paint with a hair dryer and then painted another coat on top of that. Two coats seemed good enough for this fabric and paint so after drying the paint again, I peeled off the stickers and you can see the result above.

Another way to decorate a onesie (or any piece of clothing) is by using a stencil with fabric paint or fabric markers. I created this sunglass stencil in Adobe Illustrator and then printed it. You can find any number of simple, silhouette designs online to use.

I traced the design onto a sheet of plastic with permanent marker and then cut it out with a utility knife. For the plastic, I used an old sleeve I found like those used to protect reports or papers. You can use transparency film or any heavy duty plastic you can find in school or office supplies. If you don’t want to reuse your stencil, butcher paper, thin cardboard, freezer paper, or just plain printer paper will suffice but it’s more difficult to get a clean edge and most likely they are single use only. Tape your stencil to the fabric with painter’s tape, washi tape, or electrical tape. These won’t damage or leave residue on your fabric. 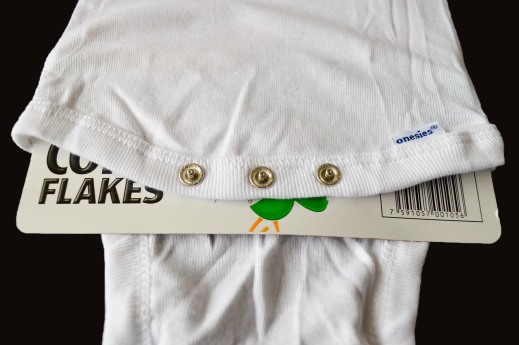 Make sure you place the piece of cardboard inside and that it covers your design but doesn’t stretch out the cotton too much. 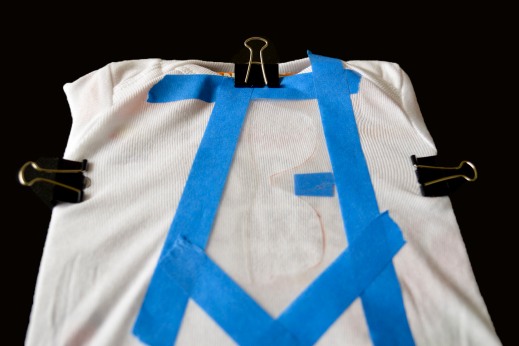 Again, use binder clips to secure your fabric to the cardboard so that nothing moves while you paint. 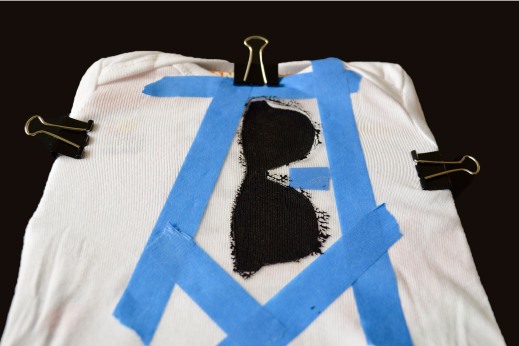 Paint the inside of your stencil, pushing down the edges of your design to touch the fabric as you go to ensure a clean edge.

I used the hair dryer again and took off the stencil. Here’s the result! When your fabric paint is completely dry (my bottle says to let it dry overnight) turn your onesie inside out and iron the opposite side of your design. While it might not be entirely necessary, I always did this with my silkscreen projects to set the paint and they didn’t fade after washing. Place a piece of scrap fabric between your ironing surface and your design just in case it bleeds.